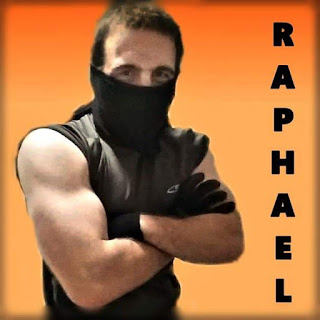 Meet Raphael. A lightning fast ninja who hunts down bad guys in the city streets of Orlando, FL.

Raphael was forced to do heavy physical labor as a child, but instead of breaking him, it turned him into a warrior with a work ethic.

Raphael continued to build strength by lifting weights then trained in Muay Thai for over a decade to become the hero he is today.

.
Deirdra: Who or what inspired you to become a superhero?
Raphael: The crime rate is rising in my area, and the police are slacking. I decided to step up.

Deirdra: How did you come up with your superhero name?
Raphael: My crime rate in my apartment complex specifically is sky rocketing. The way I see it, if this keeps happening, the surrounding complexes will have the same issue.
I chose the name because Raphael is the Guardian of Eden. This complex is my Tree of Eden. The more people take apples from the tree, the more sin spreads.

Deirdra: Who made your costume?
Raphael: I really don't have one. I just obscure my face a bit.

Deirdra: If you could have any super power what would it be?
Raphael: Flight, just to be able to travel the world.

Deirdra: What do you hope to accomplish?
Raphael: I just want to halt the crime rate from raising any higher in my local area.

Deirdra: Are the police supportive or do they see you as a lawless vigilante?
Raphael: They do not like me confronting criminals, but I've yet to get hurt or really hurt anyone else. The police as a whole dislike, but individual officers seem to like me.

Deirdra: Are you in danger by doing what you do?
I think every real life super hero is. You never know who has a weapon and who's crazy enough to use it.

Deirdra: Are you stopping crimes and helping people?
Raphael: At one point, before I decided to take on the rlsh community, in St. Augustine on a tourist street called St. George Street, a drunk man decided to smash a bottle on a homeless man's head. Then he slashed the guy with the bottle. I preformed a citizen's arrest and called the police. The homeless man received medical attention, but unfortunately, he was arrested too.

Deirdra: What does your significant other think of you being a superhero?What does your family think?
Raphael: No one I'm close with knows. I'd rather keep it that way.

Deirdra: Does your mom know you are doing this?
Raphael: Nope.

Deirdra: Do you have a weakness?
Raphael: Guns? They would most definitely hurt me at least, if not kill me.

Deirdra: How long have you been doing this?
Raphael: Just recently, but I've been fighting since I was 10 (I'm 21 now).

Deirdra: What is the most frustrating thing about being a superhero?
Raphael: Not really anything. I'm choosing to do this. I don't have to. So it's not really frustrating.


Raphael: Honestly, stay realistic, have a set goals, and never give up on them. Stay strong and consistent.