This is not a game and it’s not Halloween.
Citizens everywhere are standing up and defending their communities in a fun way that makes a bold statement.

There are still people who care about safe neighborhood and communities

And there are still good guys willing to stand up to bad guys.
One man of a small rural town in the suburbs of Portland, Oregon has taken action. Meet- 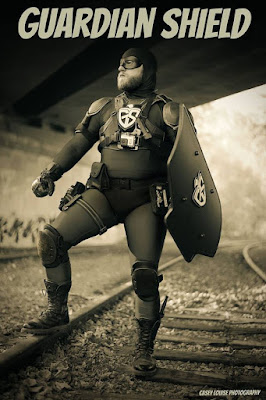 Inspired by the superheroes of comic books and The Real Life Super Hero Project of 2006, Guardian Shield now patrols his community to help keep his fellow neighbors and their property safe and protected. 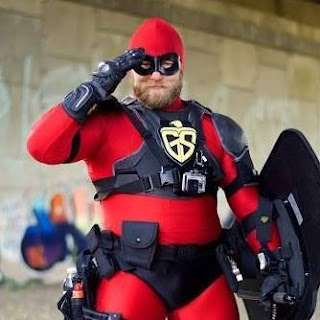 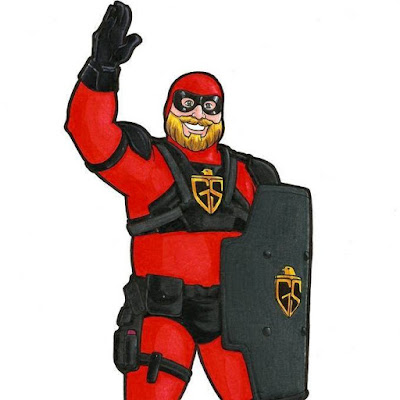 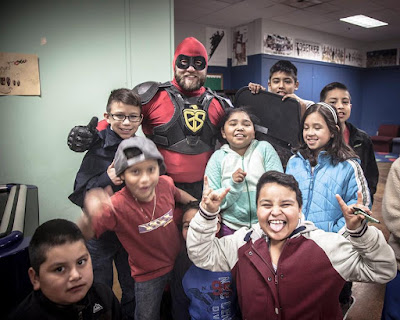 Being in the right place at the right time as well as inspiring children and adults makes Guardian Shield a hero.

Deirdra: Who or what inspired you to become a superhero?
GS: I've been reading comic books since I was 8 years old, and I was inspired and encouraged by all of them in one area of my life or another. When the RLSH movement happened in 2006 that was the spark that lit the 30+ years of heroic fuel I had stored up inside of me. My fire in life is being Guardian Shield.

Deirdra: How did you come up with the name Guardian Shield?
GS: There were many names that I was tossing around. None that I can recall now. But what it came down to was this; I wanted to be a Guardian of the city and I wanted to Shield people from harm.
Deirdra: Who made your costume?
GS:Basically, The Internet. I have been searching and piecing the majority of my outfit together for over 9 years. And I'm still making upgrades.
Deirdra: If you could have any super power what would it be?
GS: That's a tough one. Right now, some kind of travel power would be nice!

Deirdra: What do you hope to accomplish?
GS: I want Superheroes to be real and expected in our society. I want to inspire individuals so much, that there is at least an individual superhero or team of superheroes in every town, city, and state across America! Maybe even...the world.
Deirdra: What do you want the people of your community to know?
GS: I am human. I'm not perfect. But I believe in our community and that good still exists. We as a people have to continue to fight for it every day. It's not about smashing faces, but about being a presence for good, standing up against the evil and injustice in the world no matter how small or insignificant.
Deirdra: Do you have a weakness?
GS: Carbs.
Deirdra: How long have you been doing this?
GS: Currently at about 258 total patrol hours. Not counting my time out doing interviews or appearances.
Deirdra: What is the most frustrating thing about being a superhero?
GS: People who tell me how excited they are to join me, then after one night out they quit. I know this isn't for everyone, but at least make it a week or two.
Deirdra: Why do you keep a secret identity?
GS: Why does any superhero keep a secret identity? To protect the ones I care about.
Deirdra: Is it hard to keep a secret identity?
GS: In this day and age, you betcha. That's why I don't just give it away. You want to know so bad, you figure it out.
Deirdra: What did your family think when you became a superhero?
GS: I think they wanted to be surprised, but then they realized how much sense it made that I would do something like this.
Deirdra: Who is your hero?
GS: My dad, and Captain America. 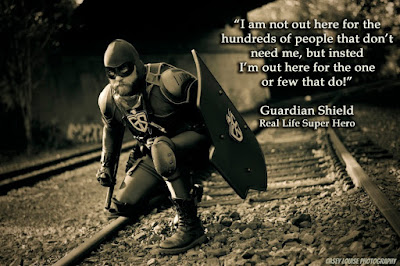 Check out A Storybook World every Saturday for updates on Superheroes. 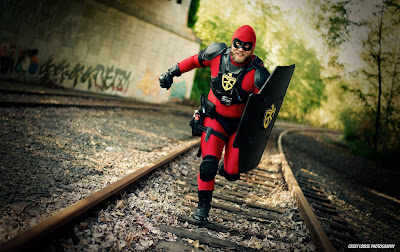