In the City Durham and Chapel Hill, NC, Impact is making and impact with the Xtreme Justice League.

As a well rounded superhero, he is trained in Traditional Goju-Ryu and Shotokan Karate, Aikido. CPR, AED, First Aid certified and he is a trained lifeguard and wilderness first aid expert.

Impact is not just fighting crime in his amazing superhero costume, but he also works with the Excelsior League, a charity cosplay group. 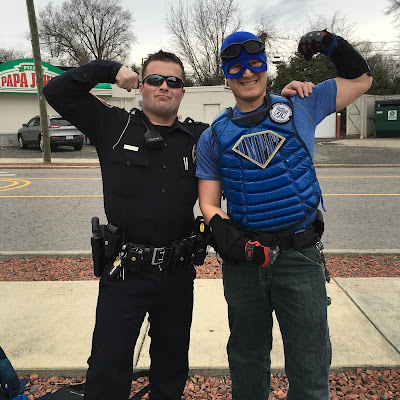 Deirdra: Who or what inspired you to become a superhero?
Impact: My parents raised us all to have a strong sense of volunteerism, and I particular I always had a bit of a superhero complex, believing it was my job to save everyone.  After learning about the RLSH movement, with my background in first aid and spending the majority of my life in martial arts training, becoming a hero seemed like a logical choice for me.

Deirdra: How did you come up with your superhero name?
Impact: The name is based on my martial arts training, as an impact is what happens when two or more things collide, and also on the fact that I want to have a positive impact on the world.

Deirdra: Who made your costume?
Impact: I designed it myself, and as it evolved over time, I had some help improving it.  Most of the base of the suit came about because of what functional clothing I already owned and could utilize, and the chest guard was an old catcher’s guard I had found.  The mask was made by a friend who occasionally joins me on patrols and handouts. The logo was designed by the XJ’s Nyght and made into a patch by RazorHawk.

Deirdra: If you could have any super power what would it be?
Impact:  Probably something like Captain America: just being faster stronger and more durable.  I don’t need anything too flashy.

Deirdra: What do you hope to accomplish?
Impact: I just want to help and inspire people.  I know I won’t solve hunger or clean the streets, but if I can get more people to care and maybe even join me, then I’ve done my job.

Deirdra: What do you for your day job?
Impact: When I started I was a student.  Currently I am a lab tech, but looking for a new job.

Deirdra: Are the police supportive or do they see you as a lawless vigilante?
Impact: Before I started calling in my patrols, they viewed me as an annoyance, because they would get calls about a suspicious character walking around.  Since then I have made my suit a bit more “heroic” and I check in before every patrol.  They seem supportive, and will sometimes ask how the patrol is going, or even to pose for pictures.  In the past, the police have also donated supplies for a homeless handout. 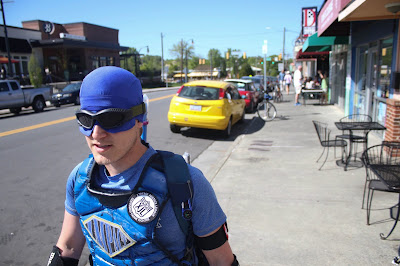 Deirdra: Are you in danger by doing what you do?
Impact: Anything can be dangerous.  Walking down the street or taking a shower.  So there is definitely some danger in what I do, and I make myself more noticeable, but I try to do it in a safe way.  I wear padding in case of a fistfight.  I call the police and let them know where I will be.  I try to be observant and aware. So there is danger but I do my best to mitigate it.

Deirdra: Are you stopping crimes and helping people?
Impact:  I’m not really stopping crimes.  In most places, its pretty rare that you actually see one happen.  I don’t think I’ve ever seen one in my life.  And I’ve been to some pretty bad areas.  Instead, I mainly help people.  One specific example was when I was near the end of my patrol and found a man passed out drunk.  I was able to get him awake and moving, and I was able I get a cab for him to go home.  It wasn’t a lot that I did, but I made sure he woke up at his own place.

Deirdra: What does your significant other think of you being a superhero? What does your family think?
Impact: My girlfriend is very supportive.  I told her right when I was starting out, as I am not a fan of lying.  She is so proud of me, and when I feel like I’m not doing enough, she builds me back up.  I told my parents about 7 months into it, though I haven’t told my siblings yet.  My parents think it is so cool.

Deirdra: Does your mom know you are doing this?
Impact: She does, and while she occasionally worries about me, she is pretty proud.  She actually might be too proud because she sometimes decides to tell her friends.  I think more of my parents’ friends know about this than mine do.

Deirdra: Do you have a weakness?
Impact: Chard.  Really not a fan. 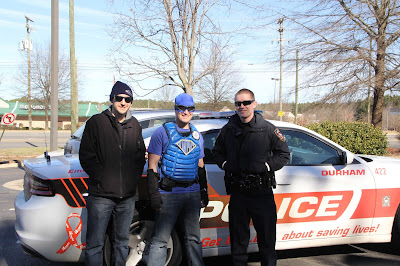 Deirdra: How long have you been doing this?
Impact: I started in mid-July, 2015.  So I have been at it roughly 9 months.

Deirdra: What is the most frustrating thing about being a superhero?
Impact: That can really change.  Sometimes, when I am on patrol I get frustrated at how people seem to ignore those in need, or just people who are different.  Its surprising the amount of people who refuse to look at me.  The other frustrating thing has to do with the online community.  Sometimes heroes get so caught up in what we do; our egos start to get in the way.  And when another hero challenges us, we get defensive and argumentative.  Then it just devolves into name-calling.  And considering the majority of us are adults, its frustrating.  And I say “we” because while I try to stay out of that stuff, I’m sure someone can find an example where I am just as bad.

Deirdra: Do you keep a secret identity, is so, why? Is it hard to keep a secret identity?
Impact:  I do, but not for the whole “I need to keep people safe” reason. I don’t think anyone care who I am or is going to hunt me down.  I just want to keep my private and public lives separate.  I’ll always try to respond to a situation whether or not I am in the mask, but sometimes, I just want to be [Name].  And sometimes I worry about being mocked by my friends.  It’s a silly thing to worry about, but when I was younger I was mocked a lot. Its hard to move past that sometimes.

Deirdra: How did those close to you react when you became a superhero?
Impact: They generally thought it was cool, or interesting, but no one seemed to find it surprising. 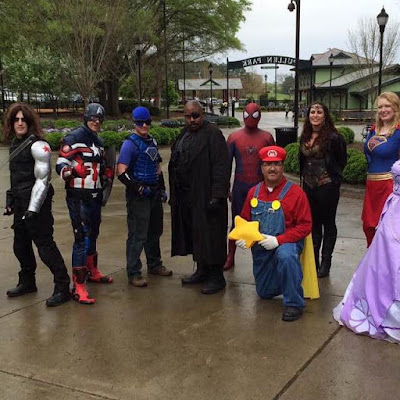 Deirdra: Who is your hero?
Impact: I have a few.  My parents are definitely heroes of mine, just because they work so hard, not just for their children’s benefits, but for their kids’ friends, and even people they don’t know.  They just care a lot.  My Shihan, or karate master, is also a big hero of mine.  He doesn’t make a lot, but he works so hard and helps so many people better themselves.  When you learn from him, you don’t just learn how to fight, but how to avoid a fight.  How to be respectful of others, and how to act.  He is just a good man.


Impact: The message I have for my community is this: anyone can be a hero.  All you need to do open your eyes, see what needs to be done, and do something.  Sometimes its just walking someone across the road, cleaning up litter, or being kind when someone looks down.  That’s it.  No mask required, though they are fun. 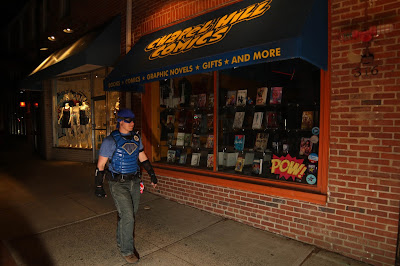