Interview with A M Jenner

A M Jenner is a grandmother, mother, daughter, granddaughter and sister with a very large
extended family. She began reading and writing at a very young age.

A M lives in symbiosis with her computer in Gilbert, Arizona. Her family also lives in the same
home, although they rarely see her. She owns a car named Babycakes, several quirky computers
(one of which has recently discovered a taste for manuscripts), and around 5,000 books, only
half of which have been catalogued. A self-professed hermit who loves interacting with friends
online, she was last seen entering the library. 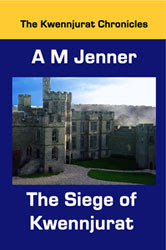 Deirdra: Where do your ideas come from? How do you know the idea is good enough to write a
book about it?

A M Jenner: Sometimes I see the scene of a book in a dream, other times I’ll see something
as I’m walking or driving past that just catches my interest and turns into a book idea. Once a
freeway exit sign in California gave me an idea for an entire manuscript, another time it was a
historical marker I stopped to read. Ideas are all around you, if you just keep your mind open to
them.

A M Jenner: I have a small group of beta readers I email and ask if they have time to read.
Generally I try to get at least three people to look at it, but sometimes it’s been as many as five.
It depends on how many are available and interested in the book’s genre when I’m ready for
readers.

A M Jenner: I hope they’ll get a short vacation that will recharge them and make them feel better
overall when they return to their real life.

Deirdra: What is your process of brainstorming a story? Do you just sit down and write, waiting
to see what happens next? Or do you outline first?

A M Jenner: It really depends on the story. When I outline, it’s not the sort of outline you write
for your history report at school, it’s more like a list of things that I want to have happen by the
end of the book. I usually have at least a little bit of an outline before I sit down to write, but
I’m always ready for my characters to take over and turn the story in unexpected directions.
Then I’m just writing it as I go along and waiting to see what happens next. That’s when the real
magic of writing takes over.

Deirdra: Do you ever experience a snag in a story, a form of writer's block? If so, how do you
deal with it?

A M Jenner: Oh, yeah, I don’t know any author who doesn’t hit snags. If writing never got
snagged up, more people would be doing it. I used to get about two-thirds of the way through
a heavily outlined plot and then get stuck because I couldn’t think of what to put next. Then I
went to a seminar where Michael Stackpole was speaking, and he said that writer’s block doesn’t
really exist, it only means you don’t understand your characters well enough. Now when I get
stuck, I go for a drive or a walk and talk to my characters, and ask them what the problem is.
Then I go home and get back on the right track. When I do that, I find that the block is gone and
the story flows again.

A M Jenner: It depends on where I am. I need it quieter when I’m working on a rough draft, but
I often listen to music while I’m editing. If I’m trying to write in a noisy environment, though, I
will put music on, even if I’m working on the rough draft, because the music will block out the
distractions. When I do that, I have to listen to instrumental pieces, though, or I get involved in
singing along and thinking about the lyrics to the song, and don’t write.

Deirdra: What words of advice do you have for other writers who desire to have their
manuscripts become books in print?

A M Jenner: Go for it. Write the best story you can write, edit it to what looks like perfection,
have some beta readers look at it, edit some more, and then set it free.

A M Jenner: Telling me they really loved a particular character, and asking questions about that
character’s life off the page. Or (shameless plug here) telling me they loved one book so much
that they went and bought the rest of my books and can’t wait to see what I’ll publish next.

A M Jenner: My books are available in print and ebook just about everywhere. They’re at my
website, www.am-jenner.com, and my blog, amjenner.blogspot.com, where there’s links to the
purchase points for whatever format you want. I distribute through Amazon, Barnes & Noble,
Smashwords, and print versions can be ordered from most brick and mortar bookstores. 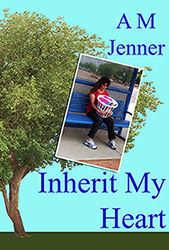 Katrina's life was peaceful until lawyer Gavin Browning showed up on her doorstep, slightly
ahead of the husband she'd fled in fear of her life.

Run over, shot at, and taken hostage, can the truth be discovered before Charleston manages to
kill them both?

Alone in Kwenndara, Princess Tanella cares for the refugees from war-torn Jurisse, while she
worries about her loved ones' safety. Her new husband Fergan is two days away in Renthenn,
coordinating the business of two kingdoms.

Kings Jameisaan and Fergasse join forces in Jurisse to pursue the war against the Black Army.
They know Liammial hasn't played his last card, and are willing to give their lives to protect
their people and their children.

Who will triumph and claim the throne of Kwennjurat?

View the video trailer at http://www.youtube.com/watch?v=ZBKYIbspn4g