Joan Sowards lives in Arizona with her husband and very eligible RM sons. Her life revolves around their five children and three grandchildren. Besides writing fiction, she is a family history addict, composes a song each year based on the assigned YW scripture, and writes an annual Christmas song.

Deirdra: When did you first know you wanted to be an author?
Joan: When in grade school, I began a Nancy Drew wannabe novel that went nowhere. Now I know it was because I had no understanding about plot. I gave up writing then and wish now I had kept the story. I made up tales for my children, but it wasn't until my mid thirties that I started another novel and discovered again that I love writing. It's never too late, they say.
Deirdra: What is your writing and educational background?
Joan: Beside that I have written a lot of lyrics and took English in college (BS from ASU), I can't claim any great background. My mother and father wrote, my brothers and sisters all write, so maybe I come by the gift-of-tale naturally.

Deirdra: What makes you passionate about writing?
Joan: I love plotting, sub-plotting, and developing characters.

Deirdra: What was the pathway like for you to get your first book published?
Joan: I've received a lot of rejection letters. ANWA (American Night Writers) has helped me a lot, and I've tried to learn all I could about the craft, and took it seriously. The Star Prophecy was the first manuscript I sent Walnut Springs Press, but when editor Linda said they wanted to publish an LDS romance, I immediately sent Haunts Haven. I believe I was in the right place at the right time.

My first published book was LDS Word Puzzles (Spring Creek Books).
Deirdra: Were you ever discouraged along the way? If so, how did you deal with it?
Joan: Oh, yes. I started wondering if I had what it took to be a published author. I'm challenged when it comes to metaphors and descriptions, and blamed it on that. A little voice in my head kept reassuring me that my novels were worth publishing, even if they were only a legacy for my posterity, and no one else.

Deirdra: What is your writing schedule like?
Joan: I write between family and everything else. I am directing our stake musical starting in January, so I need to develop a schedule and be more disciplined.

May I share a story on this same idea. One of the first songs I wrote and was willing to share with the world, was Seasons of Joy (of a Woman's Life.) I took it to a male friend who was rising in the world of Church music, to see if he thought it was of merit to publish. He looked it over and played through it, then handed it back to me. "Joan, there are so many songs about womanhood. The Church really doesn't need any more." Discouraged, and believing him since he was becoming successful, I left.

Later I showed it to another composer friend--a woman--and told her my experience. "Don't listen to him," she said. "The Church does have songs about womanhood, but they don't have YOUR song, and they need it. There is ALWAYS room for a new song."

There is always room for another novel--YOUR novel, especially if it is well written, uplifting, and inspiring.
Deirdra: What is your newest book The Star Prophecy about?
Joan: In a nutshell? Young Nephite men set sail to Jerusalem to find the Christ Child.

Back of the book blur: Most people laugh when they hear of Enoch’s dream of returning to Jerusalem to find the infant Messiah. Even Enoch's future father-in-law mocks him when he asks for a postponement of the long-awaited wedding to his beloved Rebekah. A few take Enoch seriously—the shipbuilder Omnihah, Enoch's teacher David, and Nephi the prophet.

Five years previously, a Lamanite named Samuel had stood on the wall of Zarahemla and prophesied that “five years more cometh” and the Christ would be born in Jerusalem. Time is running out! Enoch knows he must set sail across the great waters in search of his dream—to see the face of the Messiah.

The Star Prophecy is a surprising story of courage and love, faith and fortitude. Sail with Enoch and friends across the sea through hardship and adventure in search of the Christ Child.

Deirdra: What do you hope readers will get from The Star Prophecy ?
Joan: I hope The Star Prophecy might bring readers closer to the reality of our Savior's birth, and that at Christmas we will give our hearts to Christ, instead of worldly traditions. Enoch's major goal in life was to see the face of the infant Messiah. Our goal is to live worthy to see his face when we leave this existence. The Star Prophecy, as far as Enoch's journey, is strictly fictional, but read it with an open heart.

The nativity story is usually treated with awe and wonder--reverent shepherds, aged wise men solemnly walking in a line carrying gifts into a softly illuminated stable. I have tried to show it in a different way, of how the events surrounding his birth may have happened.

Deirdra: What is your process of brainstorming a story? Do you just sit down and write, waiting to see what happens next? Or do you outline first?
Joan: Outlining gives me direction. It can always be adjusted later while writing. I'll often brainstorm with my husband and daughters. They are a great help. I follow my heart and keep asking "what if?"

Deirdra: Do you ever experience a snag in a story, a form of writer's block? If so, how do you deal with it?
Joan: Usually with lots of prayer. Chocolate Roses had a snag. I put it away for several months while I mentally untangled it.

Deirdra: Do you need absolute quiet to write? Do you listen to music when you are writing?
Joan: NO MUSIC. It is too distracting. I'm plagued with songs running through my head all the time that I fight to tune out.

Deirdra: What kinds of inspiration do you use during your story creation periods?
Joan: I've found if I just let go and write of the top of my head, anything that comes to mind pertaining to the scene, and not go back and edit until the scene is finished, when I do go back, I'm amazed at how well it came together.

Deirdra: Who has made the greatest difference for you as a writer?
Joan: Kerry Blair. She has encouraged and taught me a lot. I know she has helped hundreds of writers, but we go way back to before she was published.
Deirdra: What’s your secret to making the character’s in your books come to life?
Joan: Give each supporting character their own story, or subplot. Get into the head of the main characters.

Deirdra: What authors do you admire, and why?
Joan: There are so many! Kerry Blair is a master at the English language, Richard Peck subtlety makes me smile, Marsha Ward's smooth crafting draws me into her tale.

Deirdra: What is your favorite snack to have while you are writing?
Joan: My philosophy: If I don't eat while writing, then I have to get up when my stomach rumbles, creating a little exercise while walking to the kitchen that, hopefully, keeps me from turning into a blob.

Deirdra: What words of advice do you have for other writers who desire to have their manuscripts become books in print?
Joan: Take learning the craft seriously. Submit your manuscript. Be ready.
Deirdra: What are you working on now?
Joan: A college graduate takes a summer job for a coastal Oregon newspaper. She becomes involved in the lives of the people in the village while solving her own inner turmoils. It is an LDS genre.

Deirdra: Where can our readers go to find your books and order them?
Joan: Amazon and LDS bookstores.

Deirdra: Any final words you would like to share?
Joan: When I first joined the American Night Writers Association, there was a member who told me she had written six novels and was looking for a publisher. In my naive mind I thought, "If you have six novels and none published, then you probably never will be published." A few years down the road, I found myself with six novels and unpublished. How wrong I was! It is never too late. Keep working, keep writing, keep submitting. 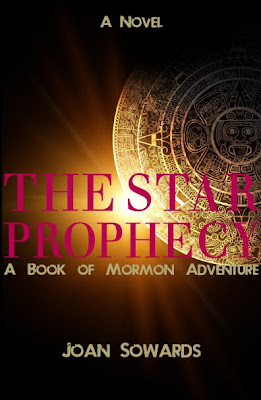 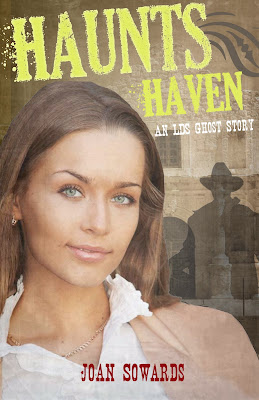 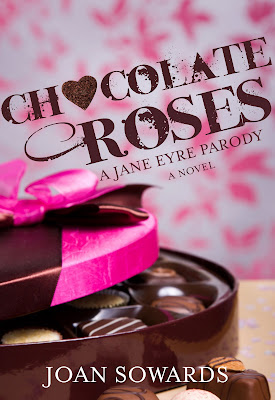 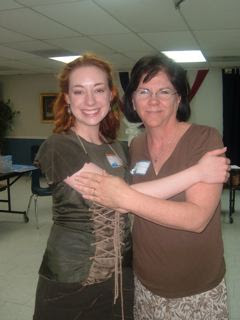 Picture of Joan and Deirdra
Posted by Deirdra A. Eden at 12:00 AM