B- Interview with Author Graham Bradley 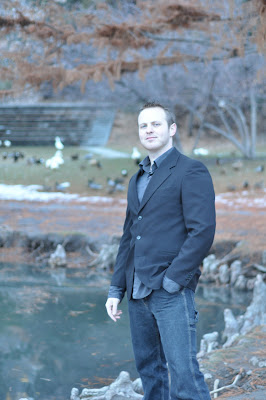 Graham Bradley started writing stories at age 8, beginning with fanfics and eventually expanding into his own work. He has written six full-length novels (at least) and is currently seeking representation for two of them. He vents by proofreading college papers for his friends, and randomly inserting lines of text that will probably get them in trouble. He also blogs and reviews books on a regular basis at grahamchops.blogspot.com.

Deirdra: What made you decide to become an author?
Graham: When I realized that it was the only thing I really cared to do full-time, which was probably back in high school. I love daydreaming, and after experimenting with it enough, I thought hey, I could spin a story out of X and Y and making something good out of it. So here I am.
Deirdra: When did you start writing?
Graham: In third grade. My teacher had us write dinky little stories and she'd get them "published" for us at Kinko's. I thought it was the coolest thing.
Deirdra: What genre(s) do you write?
Graham: Primarily young adult speculative fiction, leaning more toward sci-fi than fantasy. I like to explain things more than just by saying "well, it's magic." I have written an adult book called SILENT KNIGHT about a serial killer who only kills adulterers. It's on hold indefinitely, but I do plan on fixing it someday.

Deirdra: Is there anyone who has inspired or influenced you in your career?
Graham: Yeah, a ton of people. My mom's been really supportive of it since I was a kid, and directed me to the LDStorymakers which was run by Rachel Ann Nunes, a friend of hers. That's probably been the biggest open door in my career thus far. With regard to authors whose works have inspired me, there's Louis L'Amour and Michael Crichton, R.L. Stine, K.A. Applegate, Brandon Sanderson and a few others.

Deirdra: What is the most exciting thing that has happened in your career?
Graham: Aside from getting good feedback from agents during the last year, I won a First Chapter contest at Storymakers in April 2009. That was pretty cool.
Deirdra: For you, is writing a full time job, part time job, or a hobby?
Graham: Right now it's a hobby that I want to make into a full-time job. I just need to turn it into a source of cash.
Deirdra: Writing a novel is time consuming. What is the most effective method you have found for managing your time?
Graham: I consider myself to be really driven. I'm not disciplined a hundred percent of the time, but I do stay on top of things well enough to set aside time for outlining, drafting, brain storming and editing. If you want something bad enough, you'll make time for it by handling the rest of the "have-to-dos" on your list first.

Deirdra: What is the most difficult thing about being an author?
Graham: Right now? The fact that it doesn't pay the bills when I have to do others things that will. I think universally the hardest part is getting a draft down on paper. I actually like to revise and edit. It's like molding a lump of clay--it's easier to refine it if you have the basic shape, but until that first draft is finished it's just a lump of ideas in your head.

Deirdra: What is the best thing about being an author?
Graham: Finishing a project and reading through it to make it better. Heck, one-up on that is when someone else reads your work and genuinely likes it.

Deirdra: What are your goals as an author for the next three years?
Graham: Finish a few more manuscripts, get an agent and a good publishing deal, and manage my upcoming web comics on a regular basis.

Deirdra: Is there anything that gives your writer’s block? How do you solve that problem?
Graham: When I write too much at once, the next day is always a real load of blah. Pacing myself is key. If I do more than three or four thousand words in a day, I'm burning tomorrow's fuel. Writing is like working out, in that if I do too much on one day, it'll be weeks before I'm back at it again. So if I write just enough to the point where my word-count meter is moving but I still want to go back to it later, I'm keeping my appetite up for it, so I'll always have something to do when I come back. On a more technical level, sometimes I hit a wall with the story and I have to go back to the outline to see how to steer it in the direction I want without being contrived.

Deirdra: Do you have a favorite writing snack food?
Hot apple cider does the trick!

Deirdra: Where is your favorite place to write?
Graham: At my desk in my room. Usually anywhere that's quiet where I can sit comfortably, without a ton of other people around.

Deirdra: How do you come up with your character’s names?
Graham: If there are names I like or names that sound cool, I'll piece them together until I come up with something that feels good. My main character in ARMALECT, a YA robot book, is named after a roommate of mine when I lived in Spain. The main character in GHOST MACHINES actually started out with a joke-name, "Chase Danger." That was kind of cool because my challenge was to give him a decent enough back story in order to make such a ridiculous name plausible. It took four or five drafts to get it right. I'm working on a paranormal western called OUTLAW ANGEL, and gave my MC the name of "Carson Slade" because it just sounded frontier-sy. For another book, PRIME CALIBER, most of the characters are South Pacific Islanders, so I looked up names in Maori, Tongan, Samoan and Hawaiian and chose names that meant something useful. And in almost all of my books, I'll give a character the first or last name of a really good friend, for personal reasons.

Deirdra: What is the best complement you could receive from a reader?
Graham: You know, back in '09 when I won that First Chapter contest, one of the reviewers of my work said the humor reminded them of Eoin Colfer, a writer whom I respect a LOT. And that was really cool. If someone compares my work to the work of another writer, and the compare it in a good way, that makes me feel awesome. If they said something like "Oh this is cool, it's just like Stephen King" or some other A-list blockbuster author, I might think it was just hyperbole, but when it's someone who's good but not everyone reads it, I really like that.

Deirdra: If you have any books published what are they and where can readers find them?
Graham: I'm not published yet, but as I said, I'm working on launching a comic in the next few months on my blog. I'll also be posting a short story for digital download, so stay tuned for that. The URL is www.onagrahampage.blogspot.com. I talk mostly about writing, but sometimes I get into sports, politics, religion, current events, random family stories, something funny, or what have you. Any big news about my writing career will show up there.
Posted by Deirdra A. Eden at 12:00 AM