Superhero Saturday - The Xeno Of Portland 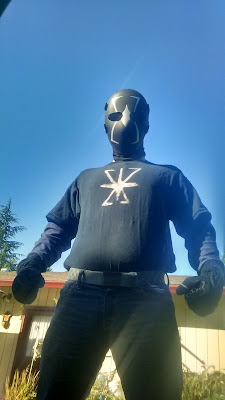 Deirdra: Who or what inspired you to become a superhero?
The Xeno: Watching bad things happen all around me, and hearing all the people complaining about said things but never offer a solution. To me, that's called whining; and I am no whiner. That is what spawned the interest to do it, but I always thought it wouldn't be taken seriously until I read an article about Guardian Shield - a local Superhero from a town not too far from here. That's when I knew that I wasn't the only one, and that if I really wanted to do it, I could, and it would be taken seriously.

Deirdra: How did you come up with your superhero name?
The Xeno: Ever seen the movie Alien? My name and persona are almost directly based on the Xenomorph. I decided to use it after I was playing an alien video game, and in it the Xeno hunts you constantly based on sight, smell, and hearing within the game. You can never kill it; and it always comes back, no matter how much you throw at it. Seemed fitting.

Deirdra: Who made your costume?
The Xeno: My costume is merely a pieced together uniform with various different clothing items, so I guess I technically "made it" but the real credit goes to the clothing companies haha.

Deirdra: If you could have any super power what would it be?
The Xeno: Power absorption; the ability to draw energy and power from virtually any source. So basically rouge on steroids, or my personal favorite comparison a super saiyan.

Deirdra: What do you hope to accomplish?
The Xeno: I hope to accomplish whatever I have to in order to restore peace and justice to my community, and then if I succeed here at home, I will do the same elsewhere wherever I may be needed.

Deirdra: What do you for your day job?
The Xeno: I attend highschool and do landscaping work for folks in my neighborhood. Once finished with highschool I hope to find a job in security.

Deirdra: Are the police supportive or do they see you as a lawless vigilante?
The Xeno: Haha, that's a funny one. The one time I have encountered the police, I attempted to wave them down to introduce myself - they stopped a block ahead, turned around, and practically broke their neck looking at me in full (Ghetto man) costume. They didn't stop, they didn't slow down, and I know they saw me. So that told me either they were able to somehow know what I was trying to do, OR they simply didn't care and turned a blind eye to a masked individual carrying a club at 1:30 in the morning. Either way, I thought it was best to continue my patrols.

Deirdra: Are you in danger by doing what you do?
The Xeno: Possibly, there are a lot of druggies in my area and some shady characters but the only difference between being a superhero and being a civilian to me is the mask. I am always patrolling my neighborhood during the night, even out of costume while I walk to a friends house or to the store. So realistically, I am in danger all the time; in fact, I feel safer while in costume as I think criminals will be less inclined to make a move on someone that looks like a superhero/vigilante.

Deirdra: Are you stopping crimes and helping people?
The Xeno: Well my goal is to do both; to me stopping crime is helping people, and helping people makes my community a more positive place. To be fair my only 'real' superhero deed happened just recently, in which I went to the convince store by my house and as I left I found a silver wallet on the ground. I picked it up and thought about turning it into the store, but I decided to look what was in it instead. I found it contained a guys Oregon trail card, Social Security card, debit card, insurance card, and his adult soccer league ID - however it didn't have a state ID, so I couldn't find his address or anything to go on. So, with some doubt in my mind I hopped on Facebook and looked up the name on the card, and it didn't take long to find someone that fit the profile, so I messaged him. A week later he messaged me back confirming its ownership by detailing exactly what was in the wallet, along with his number. So that night I called, we met up, and he got his important items back; when he tried to give me a reward I refused and simply told him to pay it forward, and to spread the word that Portland has a new protector.

Deirdra: What does your significant other think of you being a superhero? What does your family think?
The Xeno: The only people that know about my line of work are my grandparents, dad, and best friend. Both my grandparents and dad fully support it, they just want me to be safe, and my best friend thinks its funny, but doesn't really take it seriously.

Does your mom know you are doing this?
The Xeno: Negatory, I'm sure she would support it but I don't need maw worrying about me all the time. That and she can't keep her mouth shut for more than a minute haha

Deirdra: Do you have a weakness?
The Xeno: Nicotine dependency. It puts me at a disadvantage and I know it, but for some reason I just can't shake the nasty habit.

Deirdra: What is the most frustrating thing about being a superhero?
The Xeno: The expectations and differences in methods, opinions, ect. Not everyone does things the same, but everyone seems to think their ways are the right and ideal way.

Deirdra: How did those close to you react when you became a superhero?
The Xeno: Well, when I was making my mask my mom walked in and thought I was preparing to rob a bank haha.

Deirdra: Who is your hero?
The Xeno: My grandfather and Johnny cash.
I also look up to daredevil a lot, his abilities despite being blind is nothing but inspiring.

Deirdra: What do you want the people of your community to know?
The Xeno: To the scumbag criminals:
There's a new player in town, and this one is called the Xeno. He is the new guardian of Portland - evil doers beware, and stay frosty if you know what's good for you. He's the feeling you get when you are being watched.
To the honest citizens:


Do something good for someone; we need less s***** people in this world, and it can start with you. One man is capable of only so much, the community needs you as well to make a stand, and do something positive.
Posted by Deirdra at 12:00 AM