The Watchers - Knight of Light - Audiobook 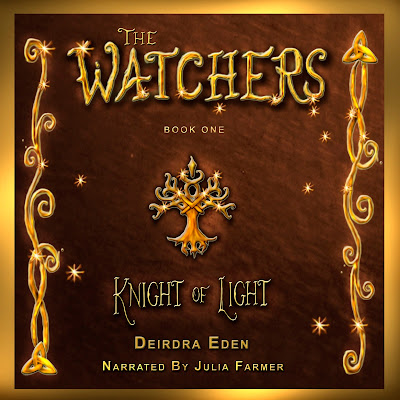 Last year The Watchers, Knight of Light broke sales records and held its place on the Amazon Bestseller List almost the entire month it first released.

More books sold in the first 10 days than, statistically, what most authors sell in a lifetime.
The Watchers got picked up by Costco and other retailers and was nominated for literary awards.

Amazon contacted us and gave us a grant to produce The Watchers, Knight of Light into an audiobook.

We had access to New York talent and the same quality production as the big five publishers.

Auditions flooded in. My book manager listened to many voice actors then passed the best on to me. My husband and I listened to so many great readers, but when we heard Julia Farmer, we knew she was the one.

I hope you love her as much as we did.


Available on Audible, Amazon, and iTunes,

In England, 1270 A.D., Aura flees her village after being accused of witchcraft and sentenced to death. Pursued by creatures of darkness, she struggles to accept the truth about her humanity and choose what side of an eternal war she will fight. Filled with fairies, dwarves, pixies, dragons, and epic villains, Knight of Light is an enthralling tale that will capture the imaginations of readers young and old.

Deirdra Eden's, The Watcher's Series, is written in a traditional fairytale style with a young girl's discovery of incredible, but dangerous powers within herself, a cast of humorous side-kicks, a quest for greater self-discovery and purpose, and villains of epic proportions.
Posted by Deirdra at 12:30 PM