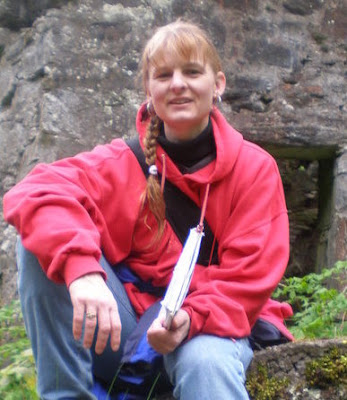 Laura grew up in the military, visiting castles in England, pig fests in Germany, and the historic sites of America's east coast. She earned a bachelor's degree in music, and worked for many years as a freelance musician, playing trombone for pit orchestras, ballets, and symphonies, and flute and harp for other venues.
After earning a master's degree in education, she took a job as a music teacher and band director. She has also taught private lessons on wind instruments, piano, guitar, and harp, for over twenty years.
In her spare time, Laura likes to play piano, harp, and flute, do sudokus, and learn languages. She is the mother of nine children, currently living in Minnesota. In addition to the Trilogy, she is working on several other novels and a non-fiction book on raising a large family.

Deirdra: What is your writing and educational background?
Laura: My writing background consists of decades of writing, from the time I was eight, poetry, short stories, lyrics, plays, musicals, and novels. I have a bachelor's degree in music, on trombone, and a master's degree in education.

Deirdra: What is your writing schedule like?
Laura: I write every spare minute I can. Sometimes, that's a couple of hours a day, sometimes it's ten. 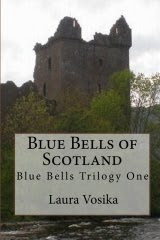 Deirdra: Can you tell us a little about the Blue Bells Trilogy?
Laura: The Blue Bells Trilogy is the story of two men, polar opposites but for their looks and love of music, who switch places in time. Shawn Kleiner is a self-centered, womanizing modern musical phenomenon, who falls asleep in an ancient Scottish castle and wakes up to find himself mistaken for Niall Campbell, a devout medieval Highland warrior. The fate of Scotland falls on his irresponsible shoulders. Niall, caught in Shawn's modern life, must contend with Shawn's angry mistresses, gambling debts, pregnant girlfriend, and the conductor's threat to 'fire' him--a serious threat to medieval ears--if he doesn't play a sell-out concert, all while trying to make the leap back across time to save his people and country at the Battle of Bannockburn.

Deirdra: What do you hope readers will get from your books?
Laura: I hope it's a book that can be read either purely as a fun adventure and story of identity switch, or as a deeper story of redemption. I have one reader who is currently on her fourth read-through and says she discovers new details each time she reads it. I hope it's a story that stays on people's minds, and I have heard from readers that they're still thinking about it a month later. I hope readers enjoy the humor. Life is funny, after all, even at inopportune moments, even when it's not a comedy.

Deirdra: What is your process of brainstorming a story? Do you just sit down and write, waiting to see what happens next? Or do you outline first?
Laura: I have tried outlining, but find characters don't always do what they told, and by a third of the way through the book, they have usually veered away from what I planned. I usually have a rough idea in my head of what's going on and where everyone is headed, but have learned to let the characters speak and act for themselves.

Deirdra: Do you ever experience a snag in a story, a form of writer's block? If so, how do you deal with it?
Laura: In writing book 3 of The Blue Bells Trilogy, I had a very clear idea of what was happening in Shawn's life. I had no idea whatsoever what would be happening in Niall's life. I finally had to just sit down and start writing, thinking about what Niall had just experienced at the end of Book Two (The Minstrel Boy). I did more research, thought about where he'd most likely be and what he'd be doing, what the people around him would be donig (think the thieving MacDougalls) and how all the previous experiences would have affected him, and his story began writing itself.

Deirdra: Do you need absolute quiet to write? Do you listen to music when you are writing?
Laura: I love music. I majored in it, played semi-professionally in many venues, on several instruments, and have taught lessons for over twenty years. But listening to it while I write is usually very distracting. I prefer absolute silence.

Deirdra: What’s your secret to making the character’s in your books come to life?
Laura: I don't try too hard to force them into an outline. When I'm writing a scene and they say something I didn't intend, I usually go with it.

Deirdra: What authors do you admire, and why?
Laura: I love Dick Francis, partly because the stories and characters are memorable, partly because I admire someone who can turn out so many books. I love the way he always includes his passion for the world of horse racing, yet his characters come from all walks of life. Particularly memorable to me is the father with six sons, and a seventh on the way by the end of the book. I rarely find authors who write about families like mine! (Seven of my children are boys.) I love Jennifer Egan's The Keep, for the intricate story within a story and otherworldly setting that is, at the same time, entirely believable as to how the people ended up where they did. I love Elizabeth Kostova's prose and descriptions in The Historian. I like Diane Setterfield's The Thirteenth Tale, again for the twists and turns. I like Mark Twain's and O. Henry's humor. I admire Ted Dekker as an author both because he can write stories that can be enjoyed on multiple levels, and because he keeps turning out one good book after another. I recently read Brendan Carroll'sTempo Rubato: Stolen Time and loved the way he incorporated time travel, adventure, and romance in a way that inspired me to once again listen to, and learn more about, Mozart. I always enjoy authors who make me want to learn more about the people or places in their stories.

Deirdra: What is your favorite snack to have while you are writing?
Laura: I don't really snack while I write. But I drink too much coffee. Every single day I tell myself I'm going to change that. Starting tomorrow.

Deirdra: Besides writing what other talents or hobbies do you have?
Laura: Music is my profession, but it's also my passion, talent, and hobby. I play and teach a variety of instruments. I also write music. I'm currently involved in a composition project with Judd Knauss of the Hallstoos Trios, whose music I love. As to hobbies, just for fun, I like studying foreign languages, but am unfortunately not yet fluent in any of them. I also like hiking around Lake Superior when I get a chance.

Deirdra: What words of advice do you have for other writers who desire to have their manuscripts become books in print?
Laura: Keep writing. And find a good critique group. They are absolutely invaluable in giving feedback, and in giving motivation to keep going.

Deirdra: What are you working on now?
Laura: At the moment, my editor is going through The Minstrel Boy, Book 2 of the Trilogy. It should be ready very soon. While she looks over it, I'm working on editing Book 3 of the Trilogy, as yet unnamed. When I finish that, I'm excited to get back to another novel I wrote last year about an American widow with six boys who moves into a Scottish castle, which turns out to have secrets as dark as the one she's keeping.

Deirdra: Where can our readers go to find your books and order them?
Laura: Signed copies can be ordered directly through my website, www.bluebellstrilogy.com. Print and kindle can be ordered athttp://amzn.to/oqaOXn and http://amzn.to/pEiDWr. It is also available through Barnes and Noble (www.bn.com) in print or Nook, at Smashwords (www.smashwords.com), or can be ordered by any brick and mortar store.

Deirdra: Any final words you would like to share?
Laura: It has been a wonderful experience, writing and meeting so many new people as a result. We live in a busy world where it seems there's never enough time for the things we hope to do someday. Make that someday today, and take even just a few minutes to start on something you'd really love to do.

Thank you so much, Laura. It’s a real honor to get your insights.
Thank you for having me, Deirdra!
Posted by Deirdra A. Eden at 12:00 AM