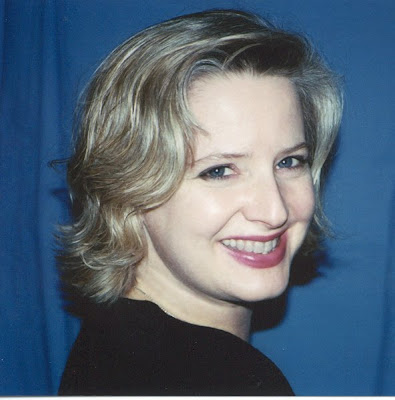 Erica Ferencik is the author of the critically acclaimed novel Cracks in the Foundation. Her work has also appeared in the Boston Globe, on Salon.com, More.com, and National Public Radio.

Cracks in the Foundation:

I wrote ever since I was a little kid – short stories, letters, remember those? bad poetry, you name it – but spent fifteen years as a fine artist, a painter, until one day I woke up and just had no interest in drawing or painting any more. I was a voracious reader and realized that I couldn’t express all I wanted with a paintbrush any more. So I pretty dramatically chucked it all and began writing. That was over twenty years ago.

I have an undergrad in Painting and French from UMass Boston and a Master’s in Creative Writing from . Half a dozen unpublished novels and the same number of unproduced screenplays sit in my desk drawer, though two of the screenplays, Mob Dot Com (co-written with Rick D’Elia), and Fat Boy, were optioned. Though Repeaters is not my first foray into the supernatural thriller or horror genre, comedy is my first love. I did standup for ten years in Boston and New York, even sold Dave Letterman jokes many years ago before he had his own in-house writers. I’m done with standup, but I write a monthly humor column in my local newspaper, and my first published novel, Cracks in the Foundation, is a satire about an insane realtor who’ll do anything to make a sale. I’m also a ghostwriter. My latest project is Radio My Way, the life story of radio personality Ron Della Chiesa, slated for release on November 1st by Pearson Education. So I’m a little bit all over the place, but it’s fun.

Deirdra: Can you tell us a little about your experience with screenwriting?

I loved writing screenplays, but ultimately the whole shebang became too frustrating for me because I don’t like counting on other people to get things done. And if you want your movie made, it’s all about playing well with others, lottery-winning luck, a fat bank account, and knowing the right people. But the wonderful thing about writing all those screenplays was that it finally whipped my ass into not only nailing strong dialogue, but also really learning story structure. Story, by Robert McKee, brought it all home for me. Since I tend to think visually anyway, it’s fun to bring that strong visual sense to novels, as well as a knack for pacing and a leanness that you learn from writing screenplays.

After twenty years, four agents - some of them quite “powerful” - a series of almosts and ultimately no offers for publication from traditional houses, I decided to start my own imprint and do my own thing. I loved learning about every element of creating and delivering a book including cover design, layout, and marketing. It was the best decision I ever made. I’m not saying it was easy, but I sold thousands of books and many other wonderful things have come out of it as well. I’m sorry I waited as long as I did!

Those years of almost getting a book published were a roller coaster of emotions. I couldn’t believe some of the kee-rap that was getting published. I still can’t believe it. You just have to remember that publishing is a business and it is driven by fear. Some editor chooses a book that’s “like” a bestselling book in hopes that it will hit and they will make a bundle or maybe just keep their job. Who can blame them? But frankly, I want to throw most book club books against the wall. Anything with Q&A in the back makes me want to shriek my head off. Like we can’t think for ourselves about a book. I’m not saying wonderful books aren’t picked up now and then, but a lot of brilliant stuff is passed over because of this horrendously stressful publishing environment. For a hilarious take on the publishing industry, read Steve Hely’s How I Became A Famous Novelist.

Depends on what I’m working on, but I put in a couple of hours six days a week, unless I’m sick or on vacation. I also need to make a living, so in all honesty some weeks are more productive than others. 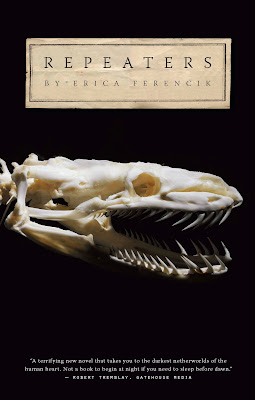 Deirdra: Can you tell us a little about your new book Repeaters, and how you came up with such a scary and complex plot. By the way, that title just gives me shivers.

Repeaters is about a young woman who comes back from the dead to to avenge her own murder by her mother’s hand.

Have you ever known someone with such an intense personality, presence, life force, that you can’t imagine them dead? For me, that was my mother. She was also cruel, manipulative, and lacked a conscience.

When my mother was alive she used to call me every day, which was one reason I hated the phone. This was before caller ID, so I would just helplessly pick it up when it rang, my heart in my throat.

Anyway, my mother died on a Saturday.

On Sunday morning while I was in the shower, the phone rang. As usual, my heart sped up, my breathing grew rapid and shallow. I stood there, shampoo in my hair, frozen, just listening to the phone bleating from the other room. I had to calm myself, tell myself: she’s dead, of course it’s not her. But still, I stepped out of the shower, grabbed a towel, and went to the phone. I stood there dripping, listening for the answering machine to pick up, for the outgoing message to play, and finally, to the caller.

Whoever it was, hesitated. The person’s breathing was labored, just like my mother’s was in her last days. After a good thirty seconds, the caller hung up.

My hand was shaking so hard I could barely get the phone back in its cradle. I closed my eyes and forced myself to remember signing her death certificate the day before. But I couldn’t help myself. The power of her will was so strong. She was dead, so what? She could still pick up the phone…

So that was the inspiration for the story. If my mother could return from the dead, why not others? Why not a race of Repeaters?

And why would they come back? Two reasons made sense to me: you return if your life is taken with violence, or if you haven’t yet accomplished the most pressing of unfinished business: loving at least one human being on this earth.

What’s a beta reader? Wait while I google it…okay. I’d have to say at least twenty-five people have looked at it and given me feedback, not including my editor. That said, you can’t listen to everyone. You’ll go insane. You have to have this little core in you that recognizes stupid criticism. And even if it makes you groan in despair, you have to be equally sensitive to comments that are right on even if they force you to do a bigger rewrite than you can stomach.

Certain wonderful teachers encouraged me when I was very young. That and getting into the program was a huge lift at the time. These days, my husband, friends, and other authors have been a lifeline in terms of encouragement and support.

Deirdra: What’s your secret to making the characters in your books come to life and keep people awake at night?

I think those are two different questions!:) Books have been written on making characters come to life in fiction. As general advice, I’d say never stop learning your craft, whether that’s through reading what you admire or writing. As you read, NOTICE what grabs you and look deeper to find out what that author has done to make you feel something. In your daily life: never stop taking mental or actual notes about what is happening around you. Keep that third eye open.

Part two of your question: how to write truly scary fiction. Again, fine books have been written about that. Back to reading and noticing: what scares you? One thing that terrifies me is loss of control over my body. David Cronenburg, screenwriter and director, is a master of “body horror,” or the physical manifestation of the psychological, such as in The Brood, The Fly, and Dead Ringers.

Below is a list of just some of my favorite authors. I admire them because they take me into another world. Make me laugh out loud, scare the pants off of me, enrapture me, transport me.

I love to dance! Keeps me sane. Love to travel, see friends, explore the world and everything in it.

Never give up. Think of the writing life as a marathon, not a sprint. But marathons can be fun, if you like running, so make sure you like writing. Do more than you talk about doing. In fact, watch out about talking about what you’ve written before you’ve actually written it. It lets the air out of the balloon in some weird way. Beware great titles that pop to mind: they will rarely match up with a brilliant book. In fact it can be damned near impossible to title something wonderful. Get a lot of people to read your work, not just friends and family. If you have a manuscript, submit it to – ideally – a couple of book clubs and bravely show up and listen to what everyone has to say. Then put it aside for three months and read it again. See how you feel about it, and go with that feeling. The traditional publishing route is great for a lot of reasons but do your research on self publishing as well. There are many pros and cons to both choices.

A collection of funny essays called Fifteen Steves, and sequel to Cracks in the Foundation called Fresh Ginger. I’m also tossing around this maddeningly elusive (because I can’t quite nail the plot) new supernatural thriller.

Amazon.com is really the best place, but if you are in the area: Wellesley Books, Tatnuck Bookstore in Westborough, and the Paper Store all carry it.

Never, ever give up!