The Amazing Eric DelaBarre's Website:
http://www.whatagreatbook.com
Deirdra: When did you first know you wanted to be an author?
Eric: It feels like the minute I left Law & Order. The schedule of primetime television is a killer, not to mention all the stories of murder and mayhem. When you spend all your creative time killing people in your mind, it takes it's toll on one's soulful expression. I wrote a script version of Saltwater Taffy years ago, but the story didn't work. I wondered if it would ever work, but after a ghost writing gig with Random House/Harmony Books, I decided it was time to make another movie. The thing I didn't count on was how strong my "long hand" was and before I knew it, the 'outline' for the new script was 8 chapters of the book. 85,000 words and 3 months later, I had a first draft. My wife thought I was crazy because I wrote 12-14 hours a day, 7 days a week. It was wild, but a wonderful ride.
Deirdra: What makes you passionate about writing?
Eric: Transformation in my own life and the life of my readers. Now that I have dedicated my creative expressions to tweenagers, I love it when a parent writes in to tell me how their kid carried around my book for days after finishing it. 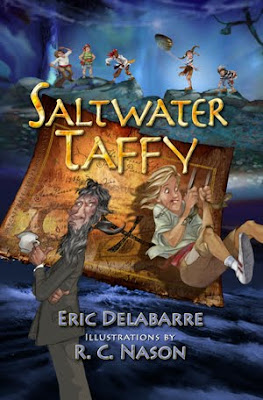