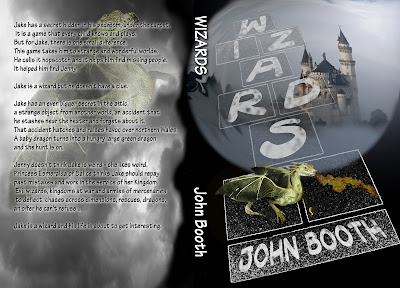 John: I wanted to write from about the age of 11 but my ability to hand write stories of any length was zero. It took modern technology to allow my writing to blossom and I didn't begin writing novels until 2006.

John: I decided I wanted to be a poet at the age of eleven, but I also wanted to be an engineer and the two didn't mix very well. I passed the eleven plus and got my first choice, which was a technical school in Sheffield. I took A levels in Mathematics, Further Mathematics and Physics and went on to take a degree in Pure Mathematics in the UK's only University of Technology. My poetic and writing ambitions were well hidden from my friends for most of this period.

However, in one of those life changing coincidences, the poet I rated as the best in modern Britain became a fellow of poetry at my university as it tried to pretend it could do arts as well as science. (It couldn't.) That poet was Roger McGough, and he and I became friends for years. He was a great supporter of my writing and I learnt an enormous amount from him.

After university I found that writing while working on designing defence systems didn't go together. I got married and that and bringing up children left little time for creativity outside of work. But as the kids got older and the PC became usable as a writing tool I started going over old work and eventually writing new things. The Internet was a great encourager as I could find like minded people. I joined Myspace and wrote epic poems for friends before I discovered I could write (bad) novels.

I joined Authonomy and learned to write by working out what was wrong with other people's stories and then applying it to my own work.

John: Writing is the most fun you can have on your own. It allows you to be creative and share that creativity with other people. I am a storyteller who has learnt how to tell stories. I think I am getting better at it.

John: I am terrible at writing synopses and querying agents. Truly terrible at it. I'd much rather write another story or edit one. While a few people are reading and enjoying my stories that's enough for me. So it would take a miracle for me to get published. I've had several in the past few months. Ex-Authonomy people asked me to contribute to their short story collections and that has led to publishers coming my way. My book Wizards has just been published by Pfoxmoor. Pfoxmoor's owner is Diane Nelson who is also my editor, a great writer and good friend. I feel comfortable with her as I do with the two other publishers who will be publishing my work over the next year or so.

John: There was a point on Authonomy when those people who believe their are hard and fast rules for writing started leaving comments on my book which contradicted what I felt to be true. It was only when I discovered that all my favourite published books also broke those rules that I was able to ignore them. They did a lot of damage for a while. I have always believed that when I learnt to write well, things would sort themselves out.

John:At the moment I'm editing books for publication and to be honest I've only written one book this year. I wrote it a chapter a day until it was finished which is my usual method. I don't edit until the book is finished because it wrecks the creative flow. Editing is much the same, one chapter a day. I do like to write at least one flash fiction piece a month, regardless of whether I'm writing or editing.

John: Not a clue. I always have a theme when I write a book. An image or emotion that drives the book along. But I plot as I write, and only the next chapter until I am within sight of the finish line. I think of writing as painting the floor of the room. You can splash ideas and action all over at first, but then you need to be careful to get the edges right and you have to make sure you can still get to the door when you finish. Short stories are different. The story has to be carefully crafted before you write a single word.

As for being good. With novels this is about entertaining the reader. Last chapter too slow? Add some action. Too obvious? Add surprises. Too fast? Slow it down. Too serious? Add some humour. This is the great thing about not plotting ahead, anything is possible. It is a point of honour that I never go back and change a plot point to make it work. The challenge of making everything fit is part of the fun.

John: As much enjoyment as I got writing them.

Deirdra: What is your process of brainstorming a story? Do you just sit down and write, waiting to see what happens next? Or do you outline first?

John: A typical pattern is to create an outline for the next chapter. Write the scenes in my head, add the key elements. When it all gells write it. However, my characters have a habit of doing something unexpected and shocking as I write them.
Deirdra: Do you ever experience a snag in a story, a form of writer's block? If so, how do you deal with it?

John: Only in terms of complexity. I wrote a novel with 11 heroes and five villains. I needed to create excel spreadsheets to make sure I knew who was doing what to who when and to make sure I didn't forget someone. But this problem only arises at the end of stories.

John: I need quiet. I can't write if there are any background distractions. Though I can edit with music.

Deirdra: What kinds of inspiration do you use during your story creation periods?

John: My life, other writers, television, film. But I never copy or plagiarise. Where would be the fun in that?

John: They have to have a consistent voice. I like fiesty females and competent males.

John: Diane Wynne Jones and JK Rowling. Their works are so good I read in awe. It is a combination of amazing imaginations and the ability to write of impossible things as though they are real

John: To believe in themselves and never to believe that anything they've written is perfect. To own the ideas completely but to be willing to change anything else to sell the book.

John: Just editing at the moment. I think I'm going to write a sequel to Wizards next.

John:My website has a list of books you can buy and stories you can read for free on the internet.
http://johnbooth.weebly.com/index.html

John: Writers write and they always finish the things they start. Follow those two rules and all will be well.
Posted by Deirdra A. Eden at 12:00 AM