Mysterious Note from the Past.

I'm currently remodeling a kitchen in a 120-year-old church. The job is extensive as I tear down the room to the studs and basically start over. As I removed the south wall I saw a paper nailed to a beam. I used my flat head screwdriver to carefully pry up the nail. It was faceted to the wall in such a way as to preserve the writing. It was clearly written in another language and appeared very old.

This area was settled by the Scandinavians and the church was originally The Emanuel Norwegian Evangelical Lutheran Church.

I reached out to my Facebook friends and found so many people willing to help me translate. I have been told the document is a mix of Old Dutch, Swedish, and Norwegian. It would make sense if this was a page from the Bible, being in a church, but its not and the tale leaves more questions.

Who are these people in the story?

Did this really happen or is it a work of fiction?

Why was it hidden in a church wall? 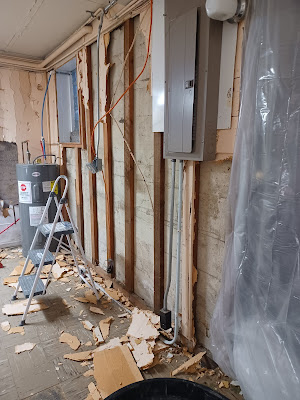 The document was found behind this wall, which is one of the original walls to the church. 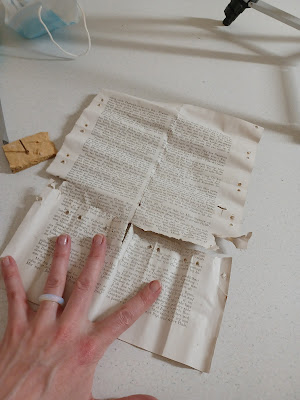 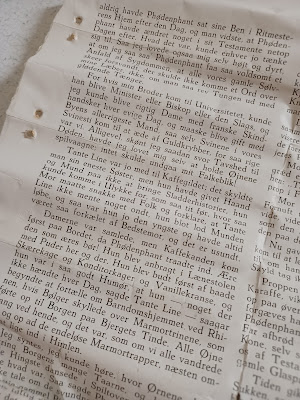 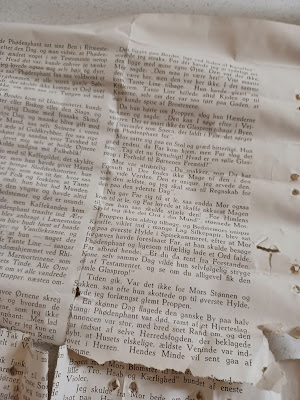 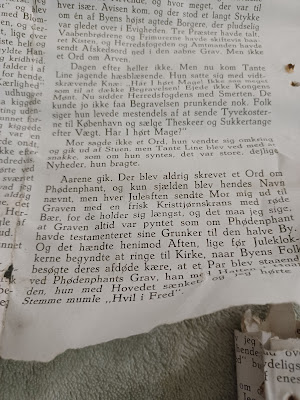 To add to the mystery, on the back was this graphic of a rose with leaves. This is my exact same style and a style that is common for artist on my fathers side to draw and carve. 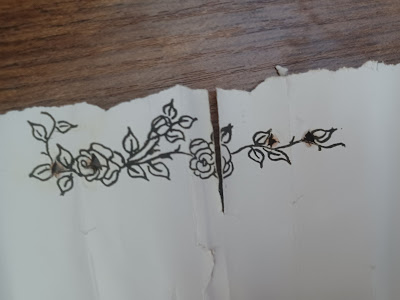 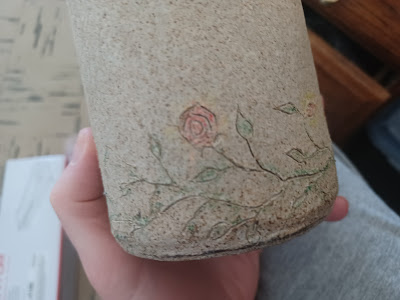 Let me know your thoughts and theories.

After that day, Phoedenhant never set foot in the riding master’s home, and one knew Phoedenphant had changed something in her will the next day. What it was, one could only imagine. So, I also promised myself, highly and dearly, that if I saw Phoedenphant have such an attack of her illness, and that all our old silver spoons disappeared, not a word would escape my lips, not even if one tore the tongue out with glowing pliars.

If my brother came to the university, he could become a minister or bishop or something like that, and I could be a proper lady wearing French leather gloves every day and perhaps marry the town’s richest man, and even the swine in our piggery would eat from golden troughs, because we were that rich. Nevertheless, even though I’d sworn to keep quiet until death, I’d promised myself to keep my eyes wide open. Nothing could avoid my falcon glance.

Aunt Line also came to the coffee party, one owed one’s sister that much, but she had given hand and mouth not to share any gossip stories. She could accidently do that, like so often before, and Mother had to sit and explain to people, that Aunt Line didn’t mean any harm, she just let her mouth run away, but then again, she was the youngest and had always been doted on by Grandmother, and that’s unhealthy.

The ladies were gathered, but the coffee pot wasn’t placed on the table before Phoedenpant entered. Honor to the one who should be honored! She was carried in the easy chair with powder here and there. She was offered first, both cake and konditor cake and vanilla pretzels, and she was in such a good mood, that she—something that didn’t happen every day, said Aunt Line—even started to talk about the childhood home by the Rhine, where waves washed up on the marble steps going up to the fortress on top of the hill. All eyes were on her, and it was as if we all climbed up and up the eternal marble steps almost into heaven.

I thought I could hear the eagles screaming around the towers of the fortress and how the white stallions dancing in the stalls, something I didn’t know what was. Phoedenphant said, “But let us not speak of days gone by. Now I am a small, poor girl walking on the edge of the grave.

And all I can do to show my gratitude for the town’s hospitality, is to remember each and every of one’s friends in the last will…”

I sat with my falcon eye to those pages. When my eyes crossed—my childhood’s greatest “Seg”—I could almost see around the corners, and I could dare give my two honor fingers as pawn that not as much as a half a teaspoon would be missing.

The party went wonderful, and Phoedenphant seemed so happy about Aunt Line’s—what Father called flight of fancy—that she almost promised to remember Aunt Line “when she least expected it.”

The guests were hardly out the door before Mother stood by the table, and I could see her mouth mime, while she undoubtably counted the spoons and dessert forks. Then she filled her hands with the silver and let out an enormous sigh.

Mother cleaned off the table herself, not to risk any of our maids breaking anything. Suddenly, I heard Mother say, “Child, where is the cork for the carafe?”

“It’s on the table next to the carafe,” I answered immediately. As that was where I had clearly seen it with my own eyes. It wasn’t there. Mother said, “It has to be here.” But it was not there. Just then, Aunt Line returned. She had forgotten her dress belt. Aunt Line always lifted her dress up to her knees, even if the cobble stones were so dry you could eat off them.

When she heard about the cork, she clapped her hands and said, “You can place an ad for that in the paper. There’s hardly a glass cork left in town, they disappear like last year’s snow, your Phoedenphant makes sure of that.”

Mother sat down on a chair and cried bitterly. She was still crying when Father came home, but Father said, Be sensible about this! What is a glass cork in comparison to the children’s future?”

Mother was inconsolable. “You speak according to your sense. There isn’t its likeness in the whole wide world. It’s unique, I inherited it, as the oldest, and I will be held accountable for it on the last day.”

Now Father started laughing. Mother also started laughing, and Father promised to get one exactly the same, even if he had to steal it. “For Heaven’s sake, don’t put that word in your mouth,” Mother groaned.

The cork never returned, and Grandmother’s unique carafe was wrapped in many layers of silk paper and placed on the top shelf in the pantry, after Mother had suggested to Father that he should visit Phoedenphant and just accidentally let a word fall. Father interrupted her, “Are you quite out of your mind, Wife, she would remove us from her will, and see if you even then would get the old glass cork back.”

Time passed. If it wasn’t for Mother’s groans and sighs every time she glanced up on the top shelf, I would have forgotten about the cork a long while ago.

One beautiful day, the whole town displayed their flags at half pole: Phoedenphant was dead, struck by a heart attack. The ad was large with a broad black border, written by the sheriff himself, who deeply regretted that the house’s beloved, oldest friend had fallen asleep in the Lord. Her memory will not be forgotten.

On the burial day, I was sent across the bridge with Mother’s flowers for her. The loveliest, little…faith, hope, and charity tied around the violets.

The will was to be opened straight after the funeral, and there was a greater excitement in town that on the day of the constitution. Because even if one knew quite a bit, no one knew everything.

I had black ribbons on my braids. Actually, I would have blackened my white straw hat with shoe polish to show I was in proper mourning, as we were among the ones who would inherit, but Mother wouldn’t hear of it. So, I wandered across Soeder Bridge with the sweet feeling that the next time I honored the planks on the bridge, I would be one of the foremost in town with money at the bottom of my coffer. But for now, I was still a quite ordinary girl with crooked heels. 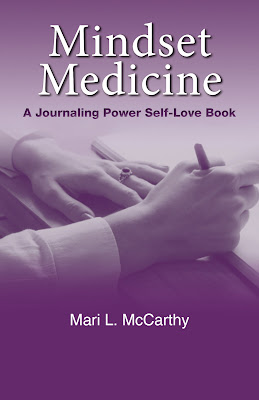 Want the cure for culture chaos?

Grab your pen and pad and prescribe yourself, Mindset Medicine: A Journaling Power Self-Love Book.

The news, the fear, the media, the texts, the constant bombardment of electronic sludge. It can all tear you down and rip you away from being YOU!

You can choose to give into this madness and be manipulated into submission. Or you can join the Journaling Power Revolution, reconnect with your higher self, and love yourself without conditions.

In her third book, award-winning international bestseller author Mari L. McCarthy reveals a journaling power path that leads to an awareness of how vibrant your life will be when you…

• Understand why you absolutely have to love yourself first

• Tap into your hidden gifts and talents

• Declare why others must ALWAYS respect you

• Promise to be YOUR own superhero!

Most importantly, Mindset Medicine explains in rich detail why the most empowering and loving relationship you can ever have – is with YOU!

Purchase a copy of Mindset Medicine on Amazon and Barnes and Noble. You can also add this book to your GoodReads reading list. 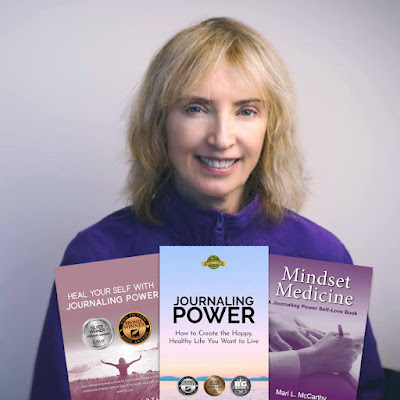 Thank you, Alice for the beautiful picture to work on. 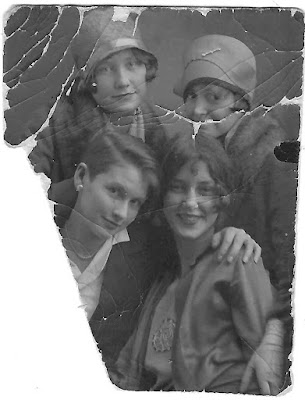 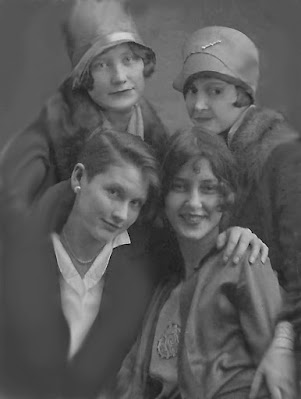 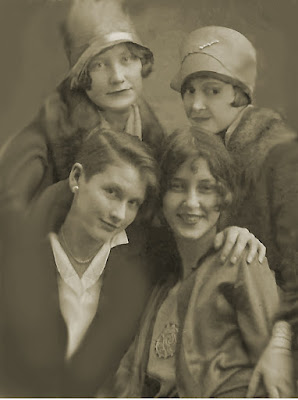