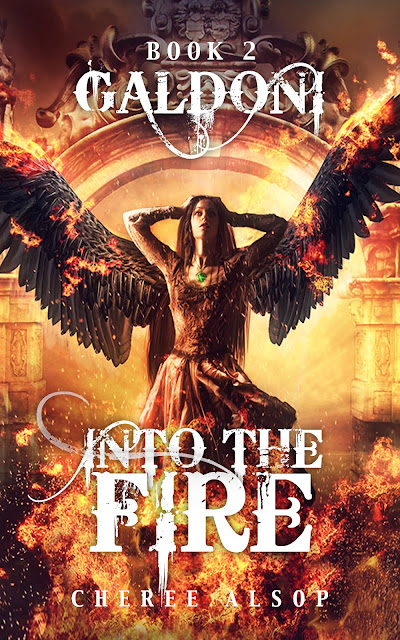 Galdoni Book 2: Into the Fire is about Saro, a Galdoni misplaced by the closing of the Academy and taken in by a man whose motives are directed by a dangerous enemy. As Saro’s world crashes around him, he finds the one thing that was never meant to exist, a female Galdoni. He races against time to save her and in turn finds himself at the mercy of other Galdoni striving to carve their place in the world. Amid the burning chaos that has become his life, Saro finds a solace he never expected, eyes filled with understanding and a smile that steals his heart even though he’s only begun to trust.


With the fate of the Galdoni on his shoulders, Saro has to decide what’s worth fighting for, and how much he is willing to put on the line.

The Colony by Cami Checketts

The Colony by Cami Checketts To protect her sons from the mistakes of her past, Brinlee Trapper escapes to a secluded mountain home. But there are dangers lurking in the mountains she has never encountered. The little family is saved from injury by Jed, a mysterious hunter. Brinlee is drawn to him, but she worries about his involvement with a peaceful commune hidden deep in the mountains behind her property. Lance, Brinlee’s attentive neighbor, has his own troubled history. Between his obvious attraction to Brinlee and his developing love for her children, Brinlee finds it more than difficult to guard her heart against this tender intrusion. While Jed offers a life of excitement and freedom, Lance holds the key to the family Brinlee always wanted. When it comes time to choose, she learns that both men have secrets that could shatter her fledgling trust in men and the wrong decision could leave more than her heart exposed to danger.

Praise "Cami Checketts is a genius! She writes about topics that aren't widely discussed, in and out of books, and she does such a brilliant job of crafting these things into wonderful stories that touch your heart and remain with you for days afterwards." ~Myra, Reviewer, Pieces of Whimsy

Author Cami Checketts Cami Checketts is married and the proud mother of four future WWF champions. Sometimes between being a human horse, cleaning up magic potions, and reading Bernstein Bears, she gets the chance to write fiction. Cami graduated from Utah State University with a degree in Exercise Science. Cami teaches strength training classes at her local rec and shares healthy living tips on her fitness blog: http://fitnessformom.blogspot.com. Cami and her family live in the beautiful Cache Valley of Northern Utah. During the two months of the year it isn’t snowing, she enjoys swimming, biking, running, and water-skiing.
Website * Twitter * Facebook * Fitness Blog
Blog Tour Giveaway $25 Amazon Gift Card or Paypal Cash Ends 2/6/14 Open only to those who can legally enter, receive and use an Amazon.com Gift Code or Paypal Cash. Winning Entry will be verified prior to prize being awarded. No purchase necessary. You must be 18 or older to enter or have your parent enter for you. The winner will be chosen by rafflecopter and announced here as well as emailed and will have 48 hours to respond or a new winner will be chosen. This giveaway is in no way associated with Facebook, Twitter, Rafflecopter or any other entity unless otherwise specified. The number of eligible entries received determines the odds of winning. Giveaway was organized by Kathy from I Am A Reader, Not A Writer and sponsored by the author. VOID WHERE PROHIBITED BY LAW. a Rafflecopter giveaway
Posted by Deirdra at 12:00 AM 1 comment: